Chance Encounters with old friends and meeting Foss and the Nauticat

Despite the lack of wind, we set off – with only 9 miles – we were able to drift at under 2 knots and as expected the wind picked up and we arrived at Katanpää in a reasonable time. It is an island with a military history, built in the Russian occupation of Finland as part of a defence plan for the Baltic that was created 200 years earlier by Peter the Great. Later it saw life as a prison. The Gun emplacements and many of the wooden buildings housing the troops were still intact, all connected by cobble stone roads and built by forced labour. The cobbles, we now are the result of uplift of land that we had seen on the High Coast.

We had noticed a British boat in the harbour – so I went over to invite them for a drink….We met a lovely spaniel with blonde highlights called Foss and the Nauticat – and their owners Julie and Yvonne. They bought their boat in Finland and 4 years later they are still here. They love it just as much as we do. 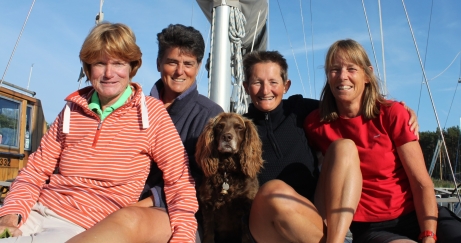 Conversation flowed easily and drinks turned into dinner. Before we knew it was well past our bedtime. The next night they invited us on board for Dinner…. which included delicious home made ginger cookies and home made bread – we needed to stalk these two! Lulling them into a false sense of security….we went our separate ways the next day. However, you can sail….. but you can’t hide!
The sun was pulverising and with only a light wind, we arrived at Brundalsviken hot and bothered. I popped into the shop to see what the depth was at the fuel pontoon. In a bit of a dwam (Scottish word) with the heat – I suddenly heard my name being called – it was Tommi Paattakainen – we had worked together closely in Nokia. It was lovely to see him – he and his son Aaro came on board. It is a small world. We ate ashore at the Thai Summer pop up restaurant and it was definitely worth the trip here.
With strong northerlies due, we were keen to tuck in out of the way. Moonstar (Yvonne and Julie) don’t have AIS – so it is difficult to stalk them without their knowledge – so you need to be less subtle – we messaged them and agreed to hole up in the same harbour. A family owned harbour with a lot of charm and tastefully developed – Parattula/ Peterzens. It was a little hurricane hole sheltered in every direction – if a little shallow in parts -thankfully it is mud as we arrived and it showed 2m under the boat. When we left it was a mere 1.8m! 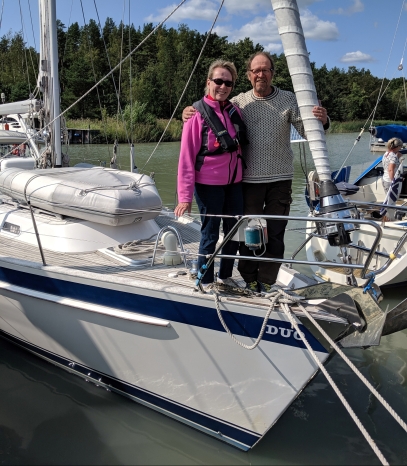 Later that day, Mags was just returning to the boat when she heard her name being called – it was Sakku and Merja. We had met them last year and then we had seen Sakku on the High Coast in July. It was lovely to see them and we joined them for a drink aboard Duo and catch up on their news. Next morning we invited them over for Coffee and Pulla ( Finnish Cakes) before they headed off.

We had a list of admin and maintenance jobs to be done – including changing the secondary fuel filter which was long overdue.

Once they were all ticked off, we went for a dog walk out to the lighthouse. 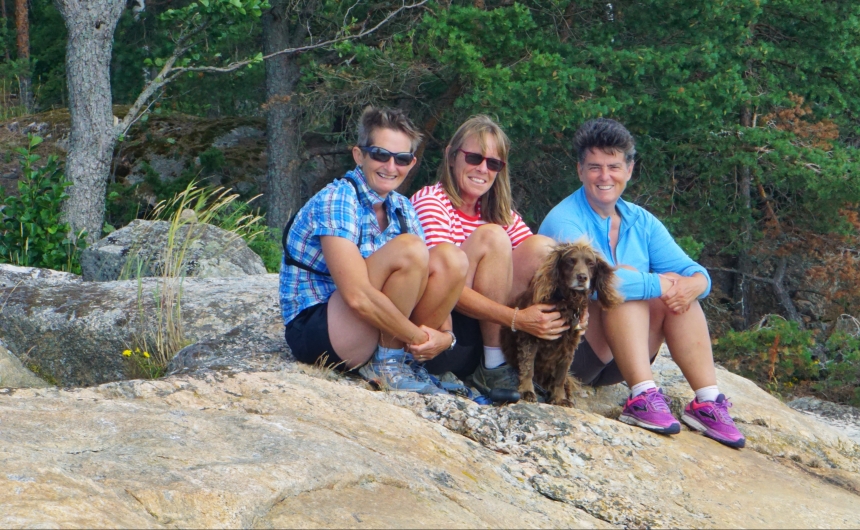 Foss, unlike Magoo, was beautifully behaved and was desperate to go swimming but wouldn’t unless she was given permission. It wouldn’t even have crossed Magoo’s mind to have asked. He belonged to the school of “ask for forgiveness after” … though come to think of it, he didn’t do that either. For the next 2 nights, we ate alternatively chez nous then chez Moonstar.

We awoke to the rain, it was the first time for weeks – so we wouldn’t be leaving today. We headed over to Moonstar – they were getting ready to go. So this time, we needed to deploy another cunning tactic. The mention of cheese on toast worked – they don’t have a grill and had said they missed it….. they decided to stay another day. After cheese on toast and cheese toasties – we had a movie afternoon and watched Hidden Figures followed by walking Foss.

Before they took out a restraining order, we decided we really couldn’t detain them any longer and so waved goodbye. We have really enjoyed their company. 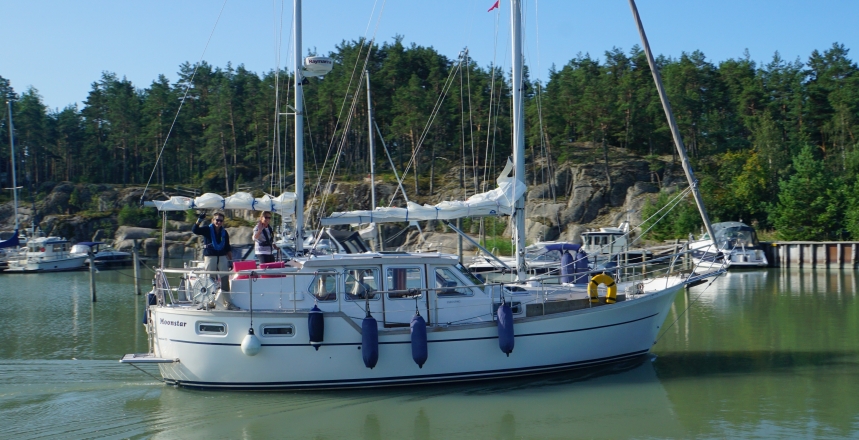 They managed to escape!