Tall Ships and All that Jazz

The water was oily still with not a breath of wind. But given that we had to drive in a convoluted pattern of straight lines to get into the harbour it didn’t matter as you

Watch tower over looking the entrance

couldn’t have sailed anyway. Another narrow shallow passage ensued and we picked up a stern buoy. It wasn’t in the inner harbour where we had hoped to go, as there was a boat in the only space we could go into. Akko and Ada our Dutch friends had sent us a mail to say they had got into the inner harbour – which at 2m deep and they draw the same as us 1.9m though the bottom is mud.
Once tied up the heavens opened and it continued to rain for the next 12 hours. The moisture in the cabin was very high, with condensation forming on the port holes and it was very chilly – what happened to summer?
The next morning there was a dire forecast of more rain but a gap in the rain made us poke our heads out of the hatch to see that the space in the inner harbour was now free. So we dropped lines and headed off…… we need 1.9m to float. We started at 3m down a narrow channel and as we got to the pontoon, the water was quickly evaporating and we were down to 2.3m, 2.1m – all the time I had in my mind White Haze did it, so can we….. tied up with 15 cm to spare. Whilst there are no tides here, the water level does vary…. and can go 0.5m either way. But there is a 2 day water level forecast so I would keep an eye on that. But we certainly wouldn’t be filling up our water tanks here!

The inner harbour was very sheltered, closer to the loos plus we were surrounded by 3 Tall Ships – trading vessels from the age of sail. Very Onedin Line. 2 were still active ships – but had a summer use as a restaurants and the other was a permanent restaurant. We had a delicious meal on Katarina. She had last carried cargo in the 1950s; below decks the tables were close to the hull in the bow- very atmospheric – the wood oozing the salty, tarry, smell of days of old.

We explored Rauma, the old town has 600 full fine pastel coloured old wooden buildings, reflecting its trading past with some fine merchant houses. Wandering off the main street there was an intimate feel about the town, with the winding cobbled street and wooden houses, each displaying its name plate. 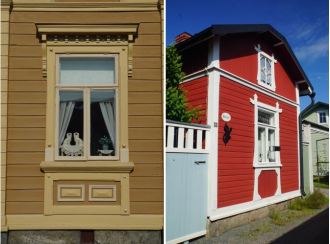 Left: Wally Dogs    Right: Gossip Mirrors so that you could see who was in the street

Many houses belonged to sailors and had 2 wally dogs in the window – facing inwards displaying that the master was at home, outwards – he was a sea. What nefarious activities went on when the dogs were facing outwards – doesn’t take much imagination. 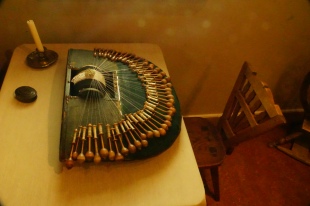 Lace from Rauma was traded around northern Europe. It was a cottage industry where the work was done by the poorer men and women of the town. Very intricate patterns created with many bobbins and pins – painstaking detail.

Just up the coast is Pori, home of the Pori Jazz Festival, and it was on – Finland’s largest outdoor music festival. So we decided to take the bus up to visit. The town was heaving with people, the sun was shining and the cafes spilt onto the streets. We walked to the jazz park, one stage, the free one, was playing a jazz set. But the 3 others were ticketed and playing Finnish heavy metal, very loudly – not our cup of tea. Later in the evening Stray Cats and Toto would be playing. Toto was my old boss from Nokia’s favourite group – they used to make an appearance frequently on team days out. We ate in town – a jazz band struck up in the nearby restaurant. Sadly the last bus back meant that we left at 7:30pm but we realised the best part of the festival is not the ticketed arena but the vibe of summer cafes, live music in the town that makes for a great atmosphere.

Now all we had to get out of our berth!  Since we arrived the water level had gone done 10 cm… so only 5cm to spare – what could possible go wrong! Well for a start I should have reversed out exactly the way we came in … but didn’t .. I backed out and turned ….and felt us touch the bottom – but it was mud. The back of the keel acted as a pivot on the mud and with a bit of oomph from the engine we were able to drive her off. Thankfully it was too early for an audience. Back out into the channel, 3.2m on the way in had felt shallow – now it felt positively deep. The beauty of perspective!

We returned to the lighthouse island Kylma-pihlaja, which was much busier than on our last visit and it would set up well for our next destination.