Mjalton as an anchorage had caught my eye, a natural anchorage which is a perfect circular inlet. There was little to go on – the chart said less than 3m but I had read that it was 3m deep. There was narrow entrance and as we approached there were strong gusts of 25 knots and I bottled it. I didn’t fancy having to reverse quickly through a narrow gap if I didn’t like it in there. So we set course for Trysunda ….again. With the wind just off close hauled and 2 reefs in the main, we romped along at 7 knots. Just as we arrived, 3 boats left and we managed to pick up a buoy. With other boats already there it is a lot easier to handle cross winds as your bow has no where to go and you can nose in gently to check the depth. With 2.7m by the keel but less than 1m under the bow – we were safely in. 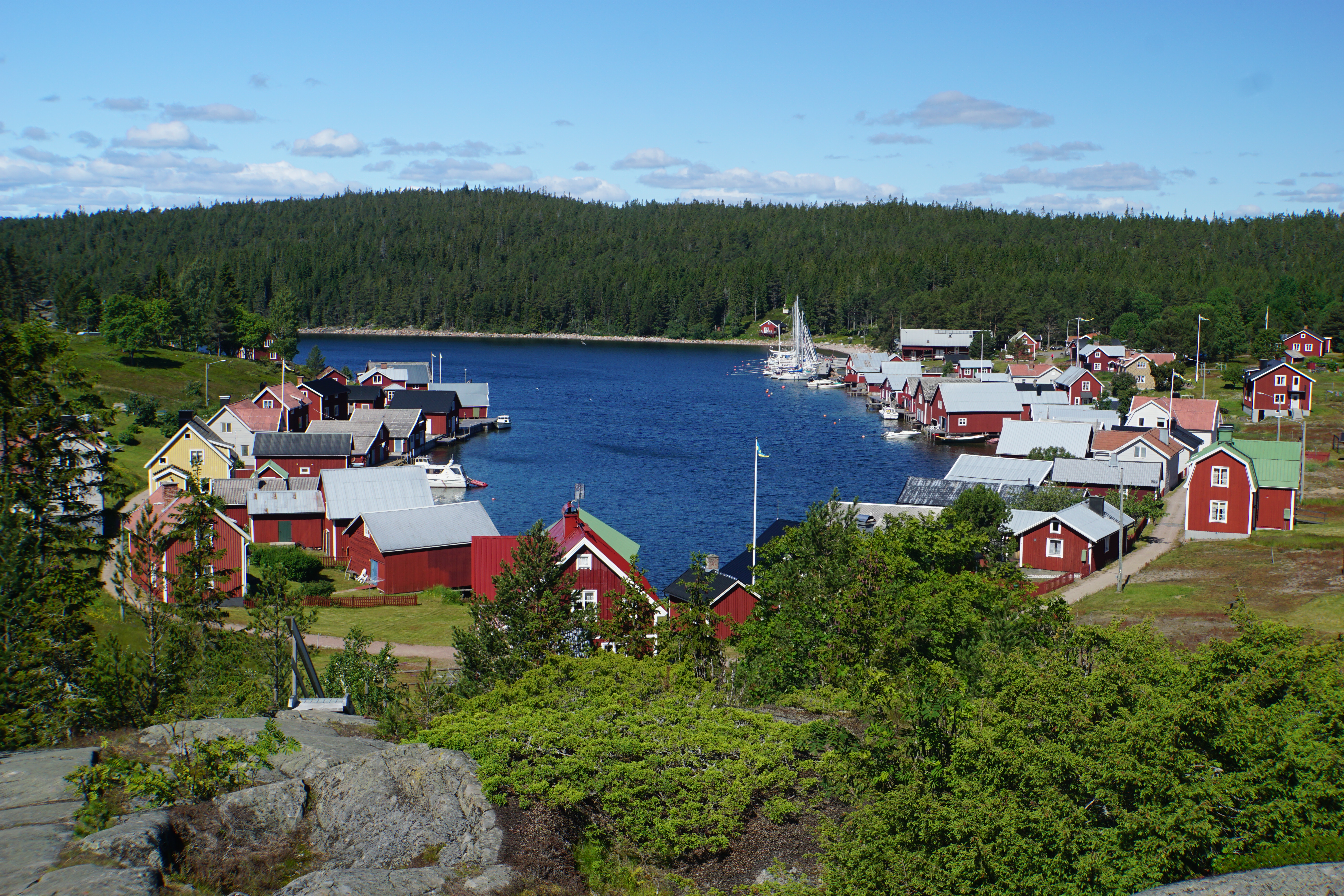 Trysunda is a an old picture perfect fishing village and consequently it is a magnet for boats. Last week when we tried before we were the only boat here – but now there were 2 boats on every buoy. You moor in the Baltic with your bows onto the wooden staging and your stern clipped onto a buoy at the back. Throughout the day more boats arrived – there was an evasion of Finnish boats that had come across the Gulf of Bothnia. Just when you thought it was full – they squeezed a few more in. The principle being if there is a gap wide enough to stick you bow into – you can force your way in.

The was an informative little fishing museum in a boat house describing the fishing fleet and life on the island. Originally it had been 3 islands with three sounds – hence the name Trysunda. But the sounds have been long since filled in with the land rising and it is estimated there will be no harbour in 1000 years time – but then with global warming – who knows they might be back to 3 sounds. There was a sweet little white wooden 17th Century chapel with the coolest key hanging up on the outside. Inside painting adorned the walls.

The next day we climbed the hill and went to the north beach – to our surprise we found a stunning sandy beach. We walked on to the next beach which was a total contrast. It was stones – but not your normal stones. Imagine smooth rounded pebbles – normally they would be a couple of 2-3cm centimes long. But these were 20-60cm – very tactile and then some massive lumps of rock – complete smoothed by the sea but made up of lots of crystals and warmed by the sun. It was a magical beach. 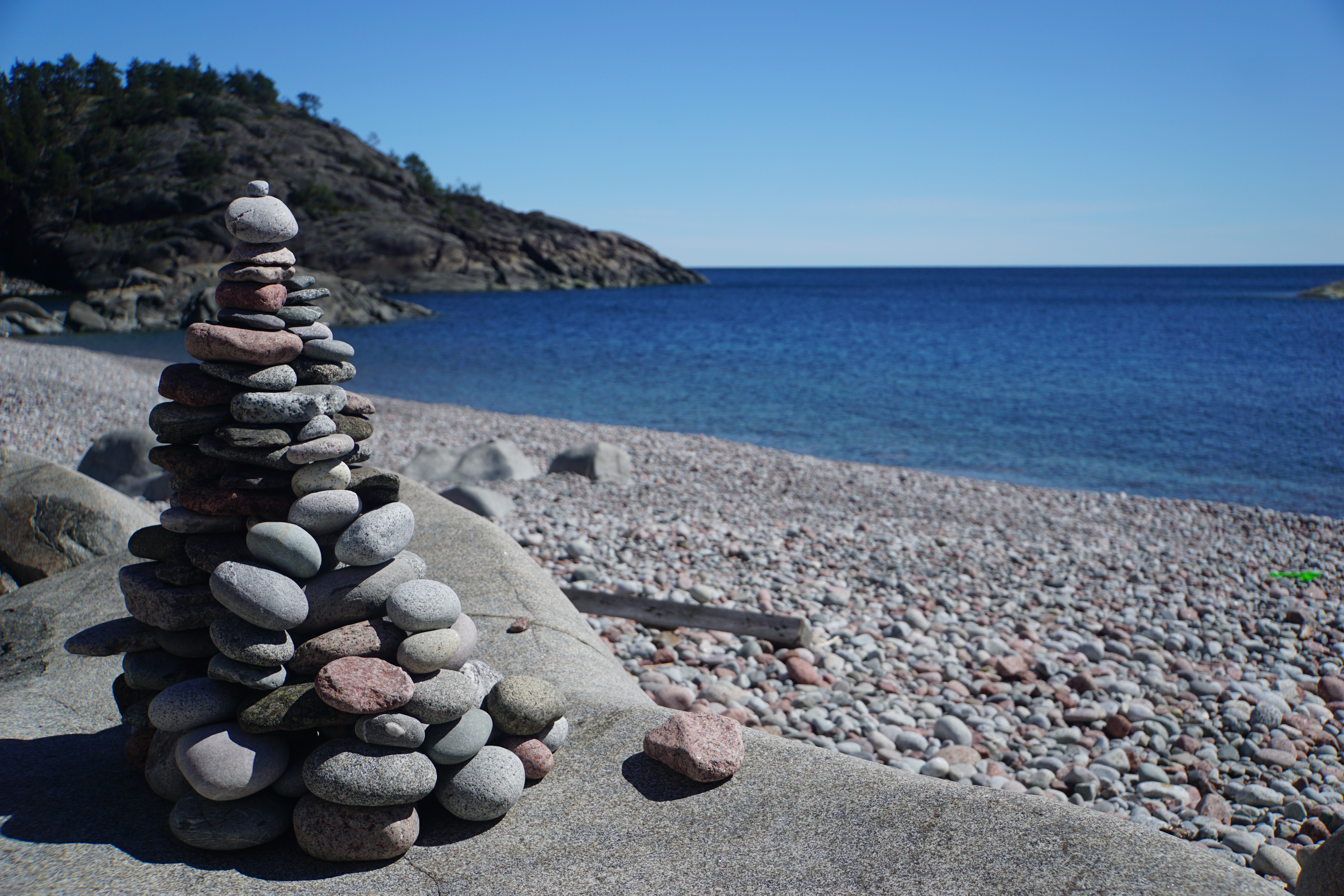 One of the pleasures of being in Scandinavia – I am not exaggerating when I say that since we came over in mid May I can count on 2 hands the amount of litter that I have seen and picked up and no plastic in the sea. So these beaches were pristine with only driftwood on their shores. Beaches and pretty red houses – this was a very special place – no wonder it is busy in the holiday period. 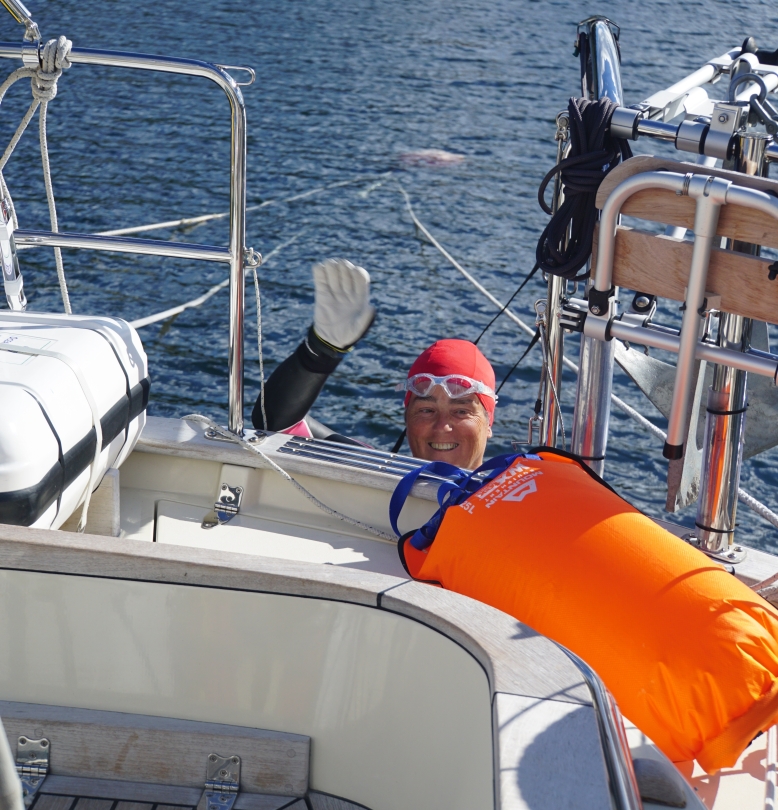 Left – Mags standing on the bottom – it is that shallow

Good paths meant it was a great island to go for a run on – so off I pootled. Though I was less convinced by Mags choice of activity – Swimming – a sentiment shared with our boat neighbours who normal will go for a quick dip whenever they can – but not here. Just 200 miles south of the Arctic circle and only 11C…… Even the sea kayaker who she chatted to her mid swim thought a 2mm wetsuit was a little thin.

Too soon it was time to leave this little gem of a harbour, as we need to go to Örnsköldslvik to replenish the supplies and to pick up Elaine. Having thought we could sail there was not enough wind when it was in the right direction and then going up the long fjord, it was against us and had strengthened. So it was a boring motor.

The town is dominated by 2 massive ski jumps, the bottom of one is crossed by a bridge – not exactly conducive to wanting to jump further! Going for a run here, I cut through the graveyard. It was very different to a British one – which even the nature of the name “grave yard” is not very uplifting. But in Sweden they are called Church gardens and flowers and greenery abound, with each stone having a little garden growing permanently. They even provided sets of gardening tools to tend to the garden. Sadly I fear in the UK these would be nicked….

Finally Proof that she is Mad 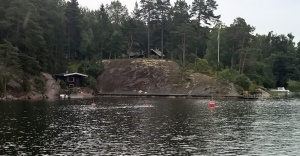 Mags is the red spot between the 2 buoys

20th July – We awoke to the steady drumming of rain on the hatch, and I was just contemplating turning over when Mags was up and about with swim suit in hand. The water temperature wasn’t exactly hot…a chilly 16.6C. Anything below 22C isn’t even an option for me. It clearly was cold judging by the expletives that were uttered on entering the water. I assumed it would be a quick dip then out again, next thing I saw was her doing laps of some distant buoys….. quite bonkers.

The rain passed and the sun came out – there was a gentle breeze and we wound our way through the rocks. There was a marked difference in the scenery, the islands became smaller and less inhabited. With only 14nm to Rodloga it didn’t matter that we were pootling along.

In the distance there was a very dark ominous cloud, we were still enjoying the sunshine but it was getting closer – then the wind died it was clearly being sucked into the weather system. It wasn’t long before we heard the rumble of thunder. We took down the sails as there are always severe down drafts under thunder clouds. We also put the handheld gps and mobile phones in the oven – this should hopefully protect them if we were stuck by lightening. With the engine on we would reach our destination faster and I would rather play lightening roulette with other boats around rather than being out on our own – is that uncharitable of me? The storm was 20 miles away, then it was 8 miles away it was getting closer, then the rain started, but thankfully the storm just past behind us and we emerged into the sunshine and we entered the fairly straight forward Rodloga natural harbour. 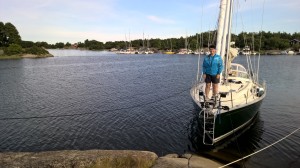 We had been here the year before with the Baltic Charter and we ended up in exactly the same spot. There was quite strong cross wind so we were quite pleased to have someone ashore take the lines. Mags set off like a mountain goat round the rock banging stone hooks into various crevices and with a rope from our stern to the shore we could brace her against the cross wind.

The evening skies cleared and the harbour was bathed in glorious sun, which really brought the red colour alive of the traditional houses on the main island.

It was soon time to fire up the Cobb BBQ which is designed not to get hot so you can put it on the deck. After dinner in the cockpit it was time to clean it. To my horror it was stuck the deck. The bottom plastic had melted to the deck. After quite a force I was able to remove it, which revealed a great big black circle and burnt fiberglass. There were only 2 reasons to be thankful. Firstly it was on the locker lid, so worst case we could replace the locker lid and we were able to remove the BBQ –

I suppose it could have been a lot worse – we weren’t happy though. We have used our BBQ many times before on the deck and never once had this problem. We banished the offending item ashore to cool down.