We left Oro following an intricate set of leading lines – most of these weren’t on the charts, which was not surprising given its military history. In Finland, leading lines are a science, in most places you are never more than 5 mins from seeing one (I am not exaggerating). Many times you can see more than one – and their colours contrast brilliantly against the dark green of the forests. With so many rocks and skerries there is always a convenient one to place the front leading marker. It is said that Finland has 50% of the world’s navigation marks, Sweden 40% and 10% for the rest of the world. Seems about right.

Having been on small islands since Kardla – we needed a food shop so we popped into Rosala to get some essentials from the little shop there. Also it would allow the wind to move round to a westerly enabling us to sail. We anchored in Helsingholm – a sheltered bay with the requisite wooden red houses and wooden staging for boats.

With only 18nm to go the next day it was a relaxed start and our sail was set within 10 mins of leaving. As we left the outer archipelago and the density of forested islands increased as did the number of boats. With schools starting after the weekend there was a steady stream of yachts returning to Turku. I think we will be on our own next week!

For the last few months we have not seen land that is greater than about 5m above sea level. So this part of the archipelago with high rocky islands made a pleasant contrast and in the sunlight the colours of the granite looked magnificent. Lots of islands here are called Hogholmen (high coast).

Coming towards us was a yacht and I suddenly realised I recognised it – it was S/Y Duo and Saku (minus Merja) – we had been on the rally earlier in the season with them and with whom we had spent a lovely day in Helsinki. We waved frantically but Duo and Saku were soon passed in a flash.

We sailed all the way to Seili and anchored in the shallow bay – off a sweet little church. A perfect spot, sheltered from the strong southerlies that we were expecting for the next few days. We were surrounded by wide beds of reeds on 3 sides and bobbing between them were a few grebes with their adolescents chicks. 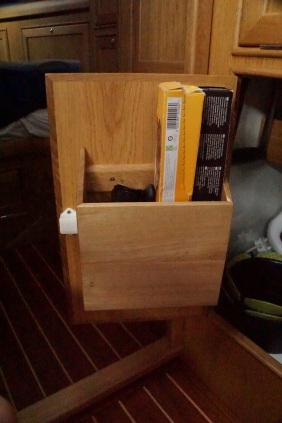 We have reached a milestone – we have been sailing for 100 days. I must admit it doesn’t feel like 100 days – we have a rhythm and pace and the days just pass, the only reason we know what day it is: my strip on my HRT tells me what day it is. Though I know it is time to come home soon as Mags is down to her last puzzle book!

We watched boats come and go from the little pier – the windy weather meant no one stayed very long – but with our anchor well dug in and sheltered from the wind, we had a relaxing day. When we had been in Espoo, I had been to my favourite wood whittling place and made several things including a shelf for a cupboard out of an oak floor board. Although I had never got round to putting it up – so a day at anchor with no distractions was perfect.

The next day we rowed ashore to explore the island. The island is very well maintained and since 1964 has belonged to Turku University as a research station. The building are well cared for and lots of red wooden houses surround a large stone yellow main building with a central courtyard. We wandered down to the other harbour past the wood fired sauna.

Everywhere we go there are information boards in Finnish, Swedish and English. The first signs of life here dates back to 500 BC. But it was in 1619 that Seili became a leper hospital, the chapel where we are anchored opposite dates back from 1733. The bell tower is quite unique.

From 1840 – 1962 the island was repurposed and became a mental hospital for the chronically ill female patients. They have preserved a cell in the main yellow building – it is tiny and the straight jacket on the bed is quite chilling. The “hospital” seemed more about isolation than it did treatment. It was quite shocking and thought provoking.

By now the really strong weather had come in and with gusts expected of 40 knots we were glad to be back on the boat. We could see the trees on shore being buffeted in the gale, the boats on the jetty shuffled their positions to try and escape the cross wind. But we hardly moved – how much less stressful it is being at anchor.