It is a Small World

Haapsalu is an attractive old spa town whose heyday was in the 19th Century. There is a dignified grandeur which time has faded; old wooden buildings some with fancy lace woodwork abound but many in need of some TLC and a lick of paint. Though there are quite a few that have been refurbished – so I think in time it will be restored to its former glory. We explored the town by bike, stopping for the essentials: tea, cake and free wifi so that we could update the log. 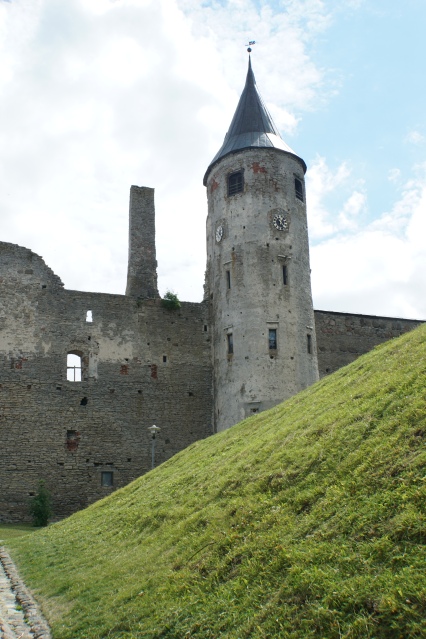 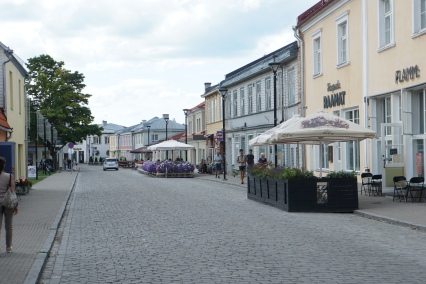 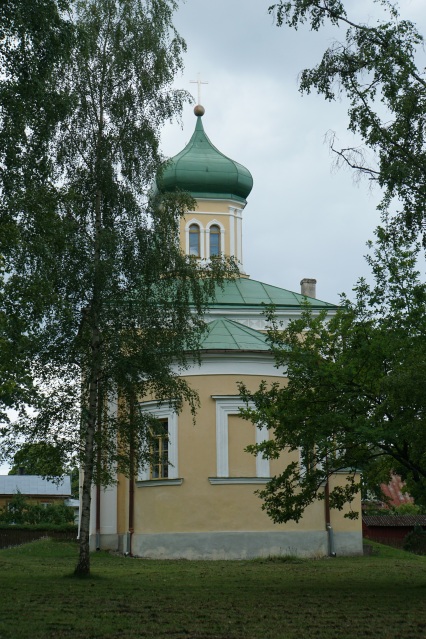 Cycling back to the boat we became unofficial extras in a commercial that was being filmed in the old pavilion overlooking a shallow sea and by shallow I mean boating lake depth. There was an impressive barrage of all things flying as a result of the water – thankfully they weren’t biting insects just sand flies, but you had to cycle with your mouth closed.

Once back onboard we were just pottering when Elaine arrived – having just got off the bus from Tallinn. When she was on the tram in from Tallinn Airport Elaine had bumped into some old university friends of ours Cathy and Simon – what a small world. Derek and Julie had invited us on board for drinks as it was Owen and Geraldine’s last night.

A Teleconf with a view 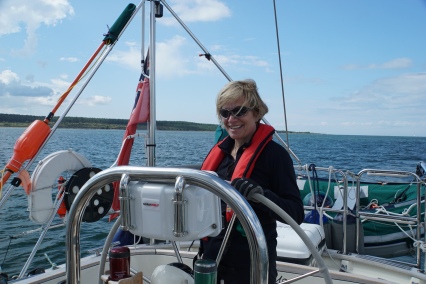 A slow motor out of through the shallow channel, followed by sailing with just the yankee and little wind saw us leave Haapsulu at a funerial pace. Next we were going out via Moon Sound – which when you look at the chart looks rather perilous with the amount of boulders that litter the shallow waters. However in reality (provided they have found them all) we had enough clearance to pass untroubled so it was a bit of an anti-climax.

Once through we are able to get the main up and sail. But throughout the day we alternated between motoring and sailing to the island of Muhu. At one point a seal popped his head up to do some human watching. He was clearly curious and treaded water ( do seals tread water?) and his big round eyes followed as round as we passed him, he snorted and then dived away. 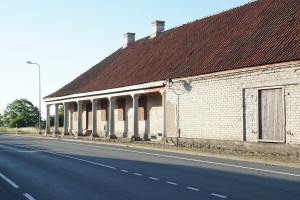 Kuivastu is a new harbour which serves as the main ferry route to the mainland and car ferries constantly crisscross keeping you on your toes when you crossed their path to enter the harbour. Once in the harbour we were greeted by a very friendly harbour master in his blue boiler suit ( on a very hot day) he took our lines on the wooden clad harbour wall. We were just about tied up when Celtic Warrior bow appeared in the small gap which is the harbour entrance – but they had to moor on the other side of the harbour as there is a fuel berth behind us. This would be the last time we saw them – we have enjoyed cruising in company with them for the last week. So one final aperitive on board Carra. Which was rudely interrupted by a very big Swiss Ketch coming in, requiring them to leap around back to Celtic Warrior to move her forward. It was so big that about 4 metres was sticking outside the harbour – which provided more shelter for us. 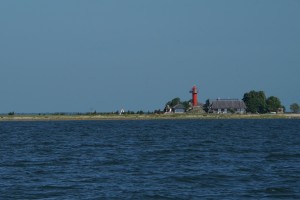 Celtic Warrior had an early start as they were on a long passage that day – so we waved goodbye to them and we set off about an hour later. Once round a small Island with a rather smart lighthouse and summer cottage, we could get all 3 sails up and head east towards Koiguste. According to the pilot book it was a small harbour with only a few berths. There are few anchorages on this coast – unless you have a lifting keel due to the shallow waters and boulder strewn landscape underwater. With an armada coming up behind us – we were keen to make it into the harbour before them. This meant we put the engine on sooner than we would have done – but eventually the wind fizzled out completely so we took all the sails down and motored. The harbour was located in a large body of water – where the land formed a natural mere with a small gap in a spit of land through which we had to pass. Once inside there was a cacophony of squawking birds– as the mere was home to thousands of gulls, geese and ducks.

Frustratingly just as we approached the entrance the wind suddenly increased – making picking up the buoy slightly more tricky as there was a cross wind. But with a second line on the buoy we were soon able to winch the stern around. Our second reel of rope 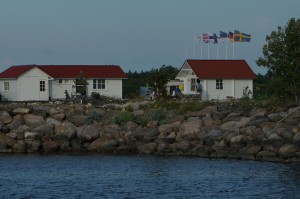 on the rail has proved a sound investment. The harbour looked nothing like any of the books and had clearly grown. Another friendly harbour master welcomed us in perfect English without a trace of a foreign accent. It turns out he did an MBA in the UK in the late 90s and he was now investing in this marina and building a small holiday village. The natural harbour is beautiful – remote and unspoilt. I hope he is able to develop it but not spoil the beauty of the place. 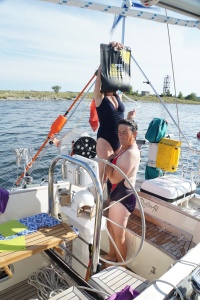 Elaine and Mags went for a swim – there was mass disbelief that the 22.6C shown on the temp gauge was correct – they both decided it was about 18-19c. Still too cold for me.

I went up to pay and met an British Couple – Janey and Neil who were cycling from Riga to Tallinn and camping enroute. Their “adventure before dementia” as they call it. Remarkably Janey went to the same primary school as I did – albeit 10 years early – what a small world. I invited them aboard for drinks as Elaine is a keen cyclist and is planning to do some touring. Once onboard the integration began and lots of useful information was gleaned about tents and equipment though in reality I think it confirmed what Elaine has already researched but it is always useful to check. They have cycled across much of Europe and are fascinating guests. Soon Janey and I talked about Beccles where we both grew up and reminisce about some of the old characters and shops in the town. The world gets even smaller when I find out that her brother now lives in the Montagu’s house in Ringsfield. My mother and Lisa Montagu met during their antenatal classes and Caroline and I were good friends as children. 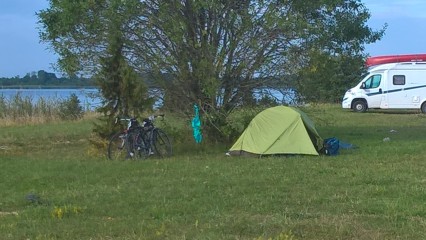 Early the next morning, it was a windless day – with mirror like reflections on the water of birds, navigation marks, little reed beds across the mere. Once out there was a little more wind – and Mags and Elaine got the main up, but noticed that there was a strange kink in the sail. We dropped the sail to investigate and it would appear that a car ( bit that holds the sail onto the mast) had come un screwed from the batten pocket. None of us can work out how this is physically possible. But we can’t sail. But as it turns out the zephyr like wind disappears and it is a slow motor to Abruka. This was a very small harbour with barely enough round to turn. We couldn’t park were I was planning to as it is reserved for the ferry so I tucked myself into the corner – we just fitted leaving a 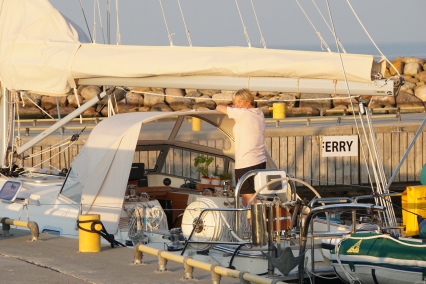 couple of meters in front of the bow of the ferry. Which we discover he uses when he comes in at speed! Later we are joined by a boat who parks in a finger pontoon but forgets to have a stern rope ready and who fenders aren’t at the right height and he parks at speed too. Lucky I was there to fend him off and hold the boat whilst he found a rope.

We were able to fix the mainsail relatively ea

sily – but we are still puzzled as to how it happened as the plastic thread seems to be in tact – so we cant work out how it came un screwed as we had to remove the car from the mast track to be able to screw it back on…. A mystery.

On shore just out of the harbour there were about 60 herons standing stony still on separate boulders, like pieces of sculpture. You would have thought Antony Gormley had been here. We watched as a few thunderstorms rumble past the nearby island of Saaremare – which thankfully we avoided all of them as we were the tallest mast of 2 in the little harbour. For such a tiny harbour they had magnificent showers.

We were keen to avoid the ferry’s return visit so made sure we were on our way by 0830 as we left we could see it was on route. Mags took Carra out of the very small harbour (which is a rare event) and did very well. 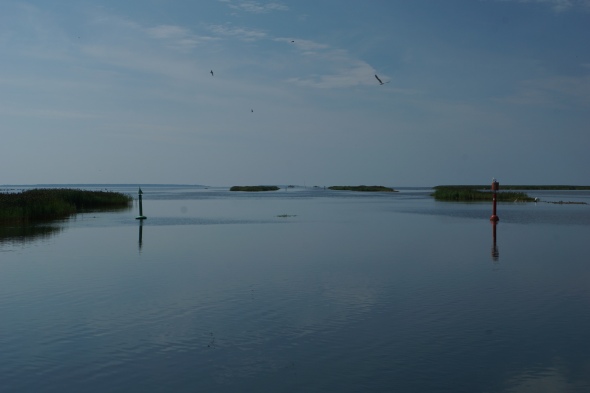 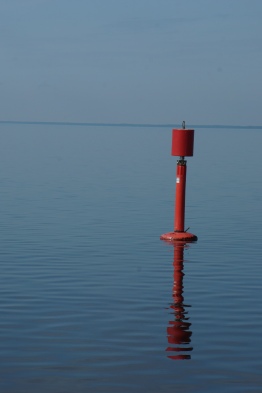 The entrance to Kuressaare is a very long straight buoyed channel only about 20m wide and 2.6m deep – either side are 2 training walls well little islands that link up – which were inhabited by thousands of birds with the adults trying to sate hungry chicks and adolescents. There was the odd bit of turf warfare with terns dive bombing seagulls that strayed to close to their nests and swans hissing at interlopers – it all made for an impressive noise as we past.

We had a fun banter with a Finnish boat that waited for us to enter – both ending on a “down with Trump”. Elaine parked Carra on a mooring buoy beautifully and we were greeted by another friendly harbour master. The busy harbour is overlooked by the 14th Century Castle. The temperature was pulverising and the air oppressive – we put up the tent for shelter from the sun. Our exploration of town was delayed with a couple of 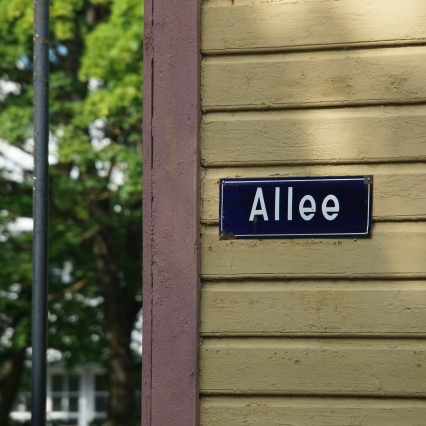 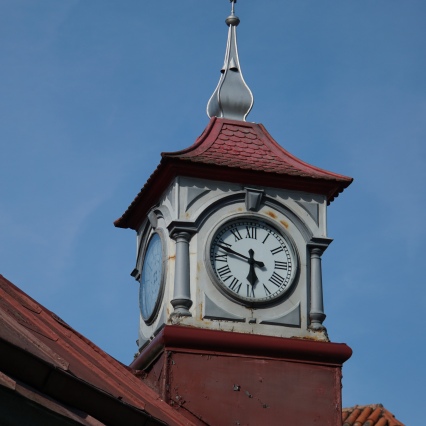 heavy showers – which cleared the air and we went for a wander. As well as the wooden buildings they had quite a few stone building owing to a fire that destroyed much of the town. With the timing that only town civic works the world over can manage the centre was in chaos as all the roads and pavements were dug up – in the middle of the holiday season. We had an ice cold drink in the old Fire station. 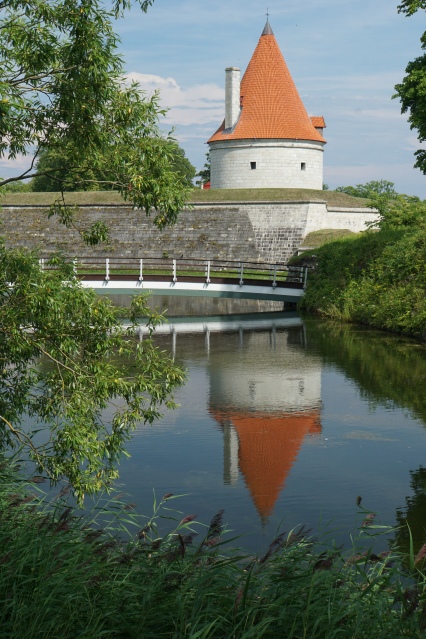 As we were heading off the next day we day some boat jobs that needed doing and it was so much quicker with 3 people. Even if the water tank fill was the slowest in history due to very poor pressure. After lunch we hired a bike for Elaine but just as we were set off it was clear Mags’ tyre was completely flat. So Mags then got a hire bike.

Thankfully we went to check the location of the bus station for Elaine’s departure the next day as it transpired there was only one ticket left. The tourist info had given a cycle path – which we followed. It wasn’t the most inspiring route – as it was along a main road and bouned by trees either side – so you couldn’t see too much. We did pass a rather large old oak forest – very unusual in this part of the world. We then continued on to a café by a river which had ice cream and brownies.

That evening we dinned outside in a restaurant overlooking the Castle and it’s moat – whose walls glowed in the evening sun – good food if some what slow service. 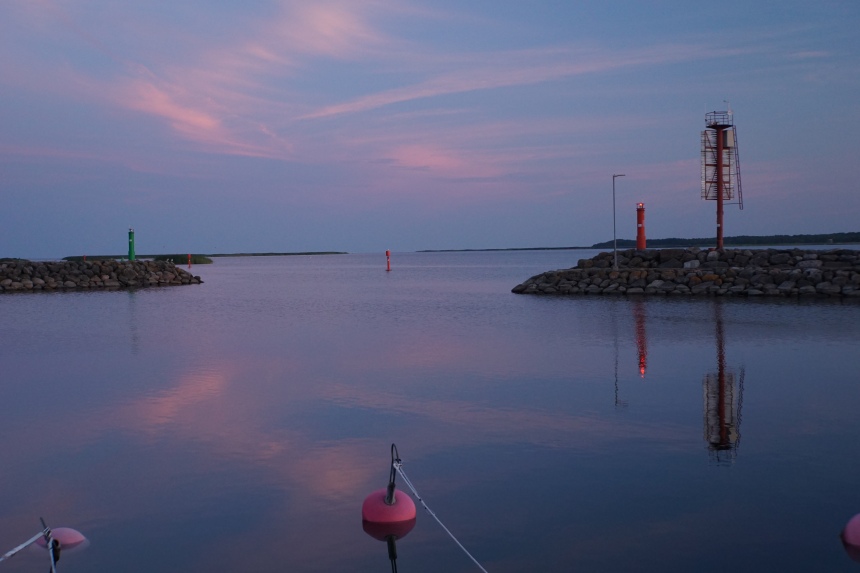