Exercise Viking 2018 and a Milk Crisis

We set off early for the Baltic ( early in Baltic time is 0730) and no sooner were we out of the busy harbour all 3 sails were set and with a light north easterly wind we were managing to cruise along at 8 knots. It was the perfect weather for a long passage – calm seas, 12-15 knots of wind from just forward of the beam and blue skies -topped off with bacon butties – it was perfect sailing. 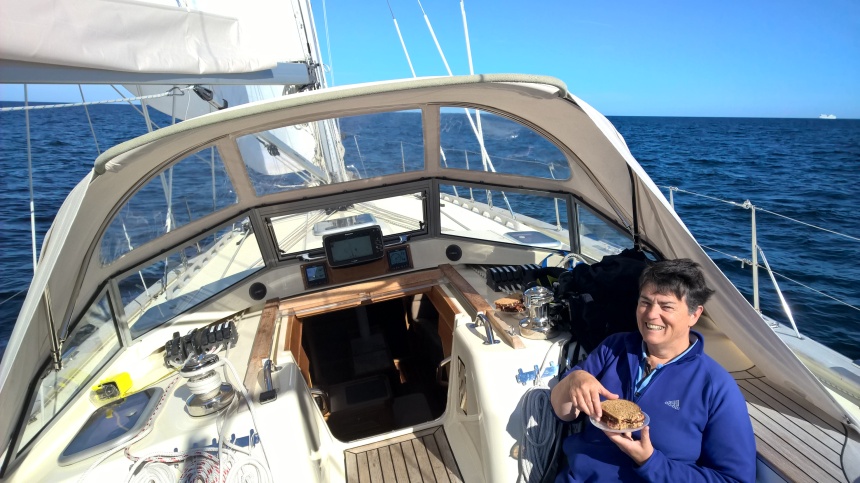 We saw the Swedish Navy in stealth mode as we have been sailing in the middle of their big Exercise Viking 2018. About 4pm we dropped anchor in a delightful bay of Stora Alo.

After breakfast we went for a walk around Island. We tied up the dinghy to a rock and went to investigate the red wooden information hut which even had a library inside. The small island is a nature reserve and still has a working farm with animals – which allows you to see how farms would have been in the archipelago in former times.

Back on board we upped anchor and had the sails up straight away for another cracking sail through rocks, well till the wind died. 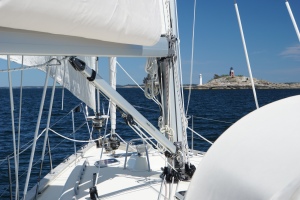 At one point we were shadowed by a minesweeper that was about 200m astern of us and it shadowed our every move and maintained our speed for about 30 mins….. it felt like a slow motion car chase at 5 knots. We then lost them by turning down the equivalent of a pedestrian alley that led to the entrance to our anchorage which was about 10 m wide and 2.9m deep ( we are 4m wide and 1.9m deep). Once into Kupa Klint it deepened and we were nicely sheltered by the 30m cliff ( tall for here) that bounded the anchorage on one side, the other side being a series of small skerries. The anchorage was very still and you could hear and see the fish jumping all around. As evening fell the wind died completely in the distant archipelago and it was as if the islands were sitting on a mirror. With the sun setting the rocks glow pink and it is what makes evenings so special here.

Our normal morning routine of a cup of tea in bed didn’t go well. We had managed to buy a white liquid that wasn’t milk – but turned our tea into the French dish of Isles Flotant – with white blobby bits floating on the surface. So out came the emergency marvel powder. But as avid tea drinkers you can only cope with that for so long. So our planned anchorage was scrapped in favour of a place with a shop that was to be Arkosund. There was more wind today which built as the day progressed so we had a somewhat lively sail. 8.5 knots into a deep narrow gap between rocks was a bit too exciting and so we took the opportunity to reef ( make the sail smaller) the yankee (sail at the front) as soon as we were in the lee of an island. Arriving at Arkosund there was a strong cross wind so we had fun tying up and finally the milk crisis was over and calm was restored on Carra.

wanted to go, it meant that we had decided to stay put for the day. Giving me the chance to try and resolve a problem we had with the heads ( the toilet). So I spent much of the day with marigolds on fixing the pump. Having replaced the valve gasket, I reassembled the pump and performed the banana test. A simulation test – which it passed but the proof is in the pudding or the aftermath of the pudding!