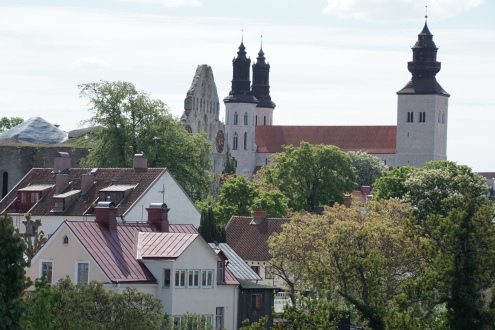 alliance. The town is surrounded by impressive city walls which was more about keep the natives away from the foreign traders who lived in the town. We had a chilled start before wandering around the town; a mixture of impressive grand houses of wealthy traders to some very small houses in the what had been a poorer quarter. There was a lovely Botanica Gardens ( think small park with flowers). We invited our neighbours around for drinks Nicholas, Max and Lynnie (Juanona) – a fascinating couple who had sailed all the way from Maine, USA.

We dug out the bikes the next day and went for a 5km cycle up a coastal cycle path, big boulders litter the beach and you started to see a glimpse of the unusual rock formations that characterise the island’s shoreline. Back on the boat we spent the rest of the day catching up on boat and admin jobs. After which we were i

nvited back to Max and Lynnie and had a lovely evening.

The island is about 90 miles long and to see more of the island we hired a car for the day and headed to the north of the Island. Inland the landscape was very rural with many small farms island. Many of the roads where line with Lilac trees that were in full blossom, deep purple, lilac and white with a wonderful smell too.

We visited the little harbour of Lickersam and saw the Maiden raukar, tall imposing limestone stacks rising from the sea. At the top of the island we took a small car ferry to Faro a small off the north coast. It had a much more open landscape with incredibly neat stone walls and windmills. 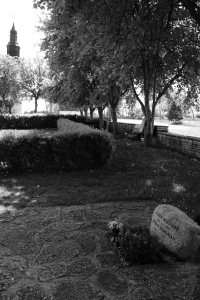 We stopped off to see Faro Church – who famous resident of the church yard was Ingmar Bergman – so in his honour I started taking Black and which photos.

At the north of the island there was the most extraordinary Rauka field – these majestic columns of limestone were enormous and the weather had craved out features that gave the appearance of faces – just like the statues on Easter Island. 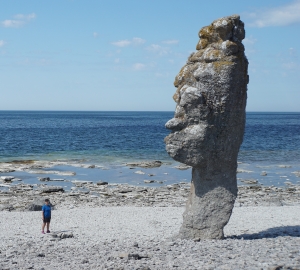 We took the coast rod

e back and came across some old fishing huts standing in complete isolation on a beaches miles from any habitation.

On the return journey we visited Bunge as recommended by Lynnie and Max – inside the walls were adourned with simple paintings dating back to the 13th century. Both churches we visited were completel open with no one 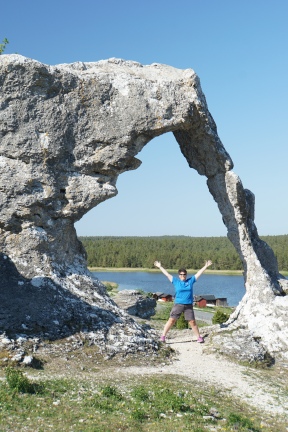 around. There is a real trust based culture here which is lovely. After supper we headed south to see the sunset over the beach at Tofta.

We waved Max and Lynnie off in the early morning – we then got the boat back into sailing mode having been in holiday mode for the last few days, after we completed our boat jobs – we just relaxed before heading into town to the Cinema to watch “The Guernsey Literary and Potato Peel Society” – it was a private viewing as we were the only ones in the cinema. 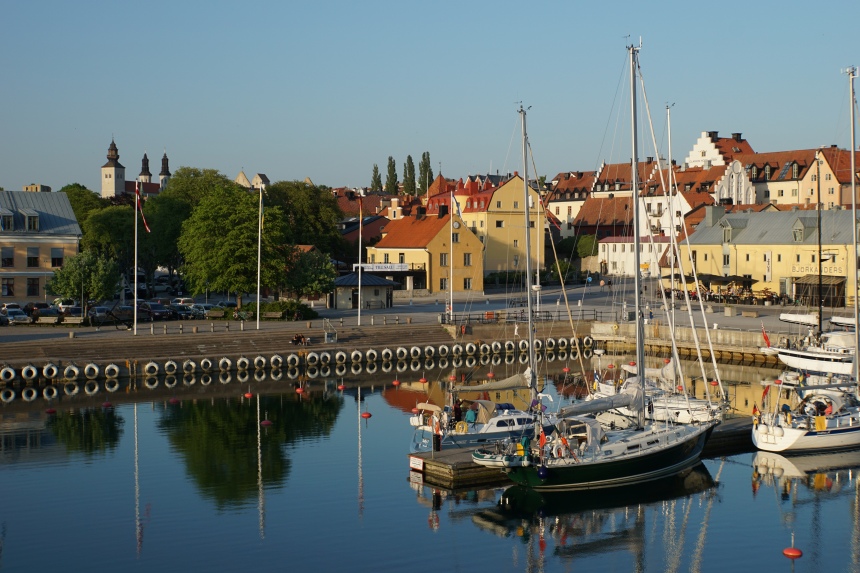