It was all downwind the next day so we just had the Yankee (large sail at the front) out. 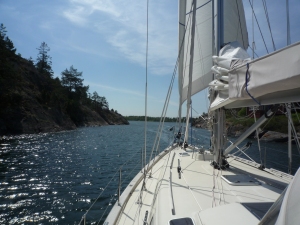 We had a lively sail to Figeholm particularly going down wind through a narrow and shallow gap – despite putting most of the sail away we doing 5.5 knots through the gap…… sigh of relief when through. We sailed most of the way til we came to a Nuclear power station and the rocky passages got a bit more tricky. We have sailed here for 3 years now but this was the narrowest rocky passage we have done – it was about an hour of intricate turns mostly marked with red and green posts but at one point the gap between the red and green was only about 7-8m….and we are 4m. But the time we got to “Figeholm’s narrow winding entrance” described in the pilot book it felt like a motorway. By the time we arrive I felt I had earnt my beer! 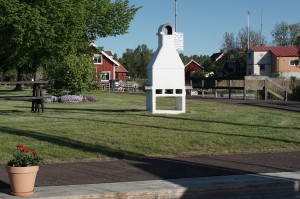 Figeholm was an immaculate little village with a gasthamn that is run by villagers – who couldn’t do enough for you. The place oozed pride and everything was very well tended. On the Saturday morning there was a works party, flowers were planted, grass cut – none of which needed doing as it was already looking good. Beautiful old wooden building lined the small inlet. We decided to stop here for a second night as it was just such a lovely place.

Our plan the next day had been to sail to an anchorage at the top of Oland Byxellrok – but when we left Figeholm we were having such a cracking sail 8knots and all 3 sail up we decided we would push on to Visby. Particularly as the wind the next day looked lighter and we might end up having to motor. At 7.5-8knots we were eating up the miles – it is about 60 miles from Figeholm to Visby. It was lovely to be able to sail without looking out for rocks though we did need to watch out for ships as it is a busy Baltic route for commercial vessels. We had a few patches of lighter wind and just as I was considering putting on the engine to make Visby when it was still light – the wind increased just enough to allow us to sail the last part and we only took the sails down at the harbour wall. We arrived just as the ferry arrived – one that we had past us 3 times enroute. We tied up about 8pm after a cracking sail. 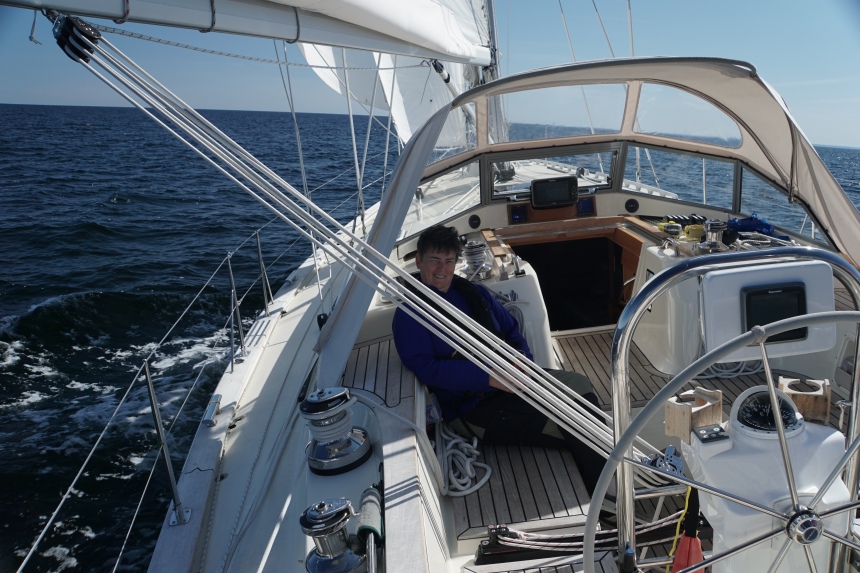