Palaces and Castles of Lake Malaren

2nd- 8th May – All togged up in thermals, we cast off our lines and embarked on our big adventure. The Y 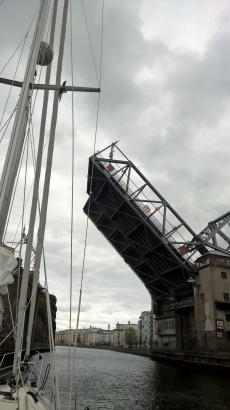 ankee (the big front sail) was unfurled and we wafted gently away from the Marina. We managed to sail for an hour before needing to motor as we were going directly into the wind plus we had a date with some bridges. Our destination was an inland fresh water lake which is accessed through a canal through the centre of Stockholm but it is crossed by 3 bridges and a lock that need to open to allow us passage through. With the last bridge opening at 15:30, it meant that we had to be at the first bridge at 14:30. We arrived 30 mins early which afforded us enough time to take a spin around Gamla Stad (Old town) which is the heart of Stockholm. This is the first of our 6 Baltic Capitals that we will be visiting on our cruise. Soon we were into the canal system – passing through a city in Carra was a slightly surreal experience. Busy central city life seems at odd with being on a boat. Once through the lock we were into Lake Malaren – which is Sweden’s third largest lake spanning 120km from east to west and the reaches 64m depth in some places. 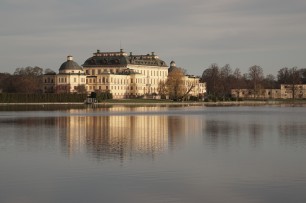 Having spent a lot of planning time looking at bridge heights – I had missed an overhead cable. It was only 15m clearance and we need 19m, this caused us to double back and go around the other side of an island where the cable clearance is 33m. Our anchorage for the night was a sheltered bay with the Swedish Royal’s Drottingham Palace as a backdrop. The wind died, the clouds disappeared and the water revealed stunning reflections.

An 8am start was essential if we were to miss the rain in the afternoon that was forecast. Anchor up and we set off passing many forested low lying islands – despite our eyes telling us we were in the middle of nowhere, there was a distant hum of traffic reminding us we were very close to a capital city as Stockholm’s citizens commuted into work. With sun shining we were hoping the forecasted rain was wrong. As we made our way west we lost the hum and the water opened up to the largest part of the lake. Apart from the

odd commercial vessel we were the only people out cruising. We arrived at our next anchorage about 30 mins too late as the rain had started. Our anchorage for the night was a sheltered bay is over looked by the Baroque Malsakers Castle. It was still shut for the winter – which is common here until June.

The next day we were off to Stragnas – which involved 2 bridge openings which went without hitch and we arrived at an attractive old town which was dominated by a large church and an old windmill. The Gasthamn had a washing machine which allowed us to get some washing done. After that we went for a stroll round the old part of town full of cobbled streets and colourful buildings.

The following day we had to back track along through the 2 bridges to Mariefred. Which is a beautiful town overlooked by Grisholm Castle – which is one of the Swedish Royal Families Cas

tles. We were met on the quay by a former work colleague of mine Heribert and his 20 month old son Gabriel. We tied up and invited them on board. Later on in the evening Heribert, Inga and Gabriel came onboard for pre dinner drinks. A winch and winch handle being a very good child entertainment centre.

Heribert had booked a table for Dinner at the local Restaurant with some very good friends of theirs Cynthia and Ulf Jonstromer and their sons Adam and Philip. What a fascinating evening, meeting a remarkable family. Ulf and Cynthia were both entrepreneurs and one amongst many of their achievements was setting up the local school which now has 600 pupils and is regarded as one of the top 10 schools in Sweden. Its success appears have been adopting the Finnish teaching system and using his cultural philosophy of BrainHeart which is at the core of his business success. A chance remark to Adam about playing the piano revealed that he was actually highly accomplished solo pianist who has performed for the Swedish Royal Family, won many European music awards and had recently played Gerswins Raspody in Blue – which is my favourite, in front of 700 people. Not bad seeing that he was only 15! After he and his brother had gone, Ulf showed me a YouTube clip of his playing and it was spine tinglingly brilliant. What a talented young man. It was easy to feel totally in awe of this family but they were very warm and welcoming. Returning to Carra the view of the reflection of Castle was breath-taking.

The next morning we ate a delicious brunch with Heribert and Gabriel in the same restaurant and then explored the Royal Palace from the outside. Later in the afternoon Heribert invited us over

to see their house which stands in the grounds of Ulf and Cynthia’s Castle. We also went to see the Orangery which they are having converted now that Gabriel is on the scene. Ulf and Cynthia invited us for tea on their terrace, which has a beautiful view of the Royal Castle and the Lake as far as the eye can see. Descendi 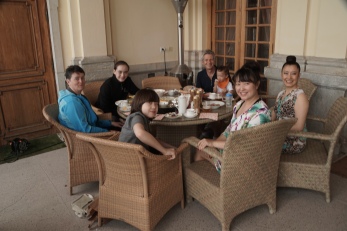 ng from the terrace are 2 grand stone staircases leading down to the waters edge and a jetty. Cynthia insisted that next time we come we moor Carra there. I was keen to know the depth, though I needn’t worry as she replied “ the King of Sweden used to moor his sailing vessels there”.

All too soon it was time to leave this memorable little town and with the wind behind us we soon had the sail out and engine off and enjoyed the tranquillity of the sail to Rastaholm. A convenient location for entering the canal the day. 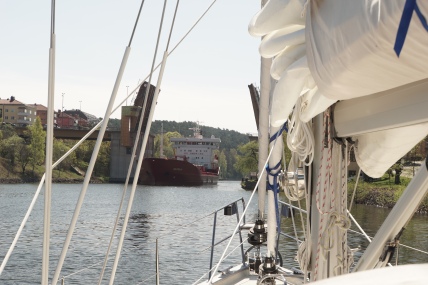 We felt that we had got this bridge opening and lock business sorted – so we were expecting a very routine passage. But little did we know this lock out of the lake is the route that all the large commercial vessels use. As required, we contacted the bridge who informed us it was a busy day. En- route there was a yacht that we had passed that was well and truly aground on a rock, we called over a rib and he went and rescued them. We arrived on time for the bridge opening and waited and waited. The bridge then told us as soon as the bridge opened to go throug

h on red as there was another vessel coming that was 18m wide. As the bridge opened, we ended up reversing as a very large vessel appeared much sooner than expected and there definitely wasn’t room for the both of us. As soon as the tanker passed we went under but just as we arrived at the bridge the light went red, and the bridge closing process started. Throttle down and we made a speedy passage under the bridge before it closed. We arrived at the lock and went onto the waiting pontoon as several tankers went through in both directions. Finally ourselves and 3 other leisure boats got passage through the lock and out of the lake.

We moored alongside at Sodertalje – time to stock up on food and pick up Jo who was arriving the next evening.