Ok so not strictly our adventures in Carra – but it was in Sweden and was very boaty – so in our minds that counts…..

From the moment we stepped off the plane in Gothenburg, it was clear that the weekend was going to be a magenta (not pink) one as we were greeting by a 5m tall picture of Abby from Team SCA. We detoured via the hotel which was a converted ship, to leave our luggage before getting the ferry across the river to Race Village. Both of us felt excited to be seeing the boats for real as opposed on a computer screen, as we had been following the race every morning and night for the last 9 months. 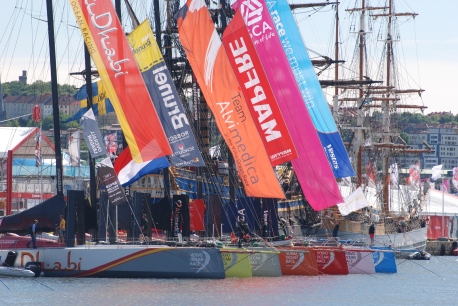 All seven identical boats were lined up in order of finish in the Volvo Ocean Race (VOR). Soon the shore crew arrived and off came the mail sail cover revealing the massive mainsail whose worn and faded appearance gave a hint of the 40000 miles it had seen to this point. Slowly the familiar faces of the crew came down to the dock, having seen them every day for months you felt you knew them – albeit in electronic stalker sort of way.

Today was the ProAm race in the river and with a good breeze and the sun shining – we were in for some spectacular sailing. They weren’t actually racing but sailing up and down the river alongside the Race village and from the grand stand we had a superb view. The footage on the computer gives you no idea how big these racing machines are – and in a relatively steady breeze of about 15 knots – these boats just accelerated through the water with their J1s set. Some were taking it easy with their J2 deployed. 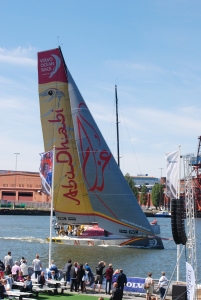 After about an hour they returned to the dock and their very lucky guests left. By now there was a definite magenta tinge to the village and it was clear that Team SCA where in their home port. Whilst you weren’t allowed on the dock, the boats were no more than 10m from the public walk way and with limited crowds because it wasn’t the weekend it was easy to get some good photos. 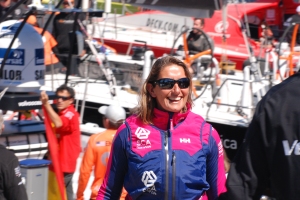 We sussed out the village and Mags went on a mission to get various freebies for friends that weren’t able to attend: which included calendars, jigsaws, pins, flags, and stickers. Also we discovered the stand which had free ice cream- we were a frequent visitor to that one! 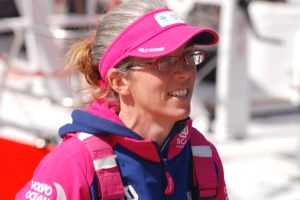 Dinner was less successful, it ranks as the worse meal in terms of service we have ever had – having to wait 2 hours for our meal and given that the starter was nachos …. Needless to say I refused to pay the slightly discounted bill the head waiter offered us – and we left paying a lot less than they had the cheek to ask for.