I got up for my watch at midnight and we were bang in the middle of the shipping lanes, Mags went off watch. Every now and again the auto pilot lost its course. But it just needed resetting and it was fine. About 1:30 with shipping still all around it stopped working altogether which meant I had to helm and you cant helm and check the big ships at the same time. So I had to get Mags up and that was the end of the watch system and any prospect of sleep! By now the wind instruments had gone blank and it was clear we were in the middle of a digital melt down. Helpfully the autopilot contribution to the general atmosphere was to alarm repeatedly to say that it wasn’t happy – you would clear the alarm and seconds later it would alarm again. Soon after the wind instrument died so did the log ( tells you the distance) and then the depth guage went and we were sailing blind. Our destination Bornhorm has a narrow shallow entrance – and no chance of finding a Raymarine Dealer – so we decided instead to head for Ystad which was an easier entrance and a bigger town. Also if we were unable to fix the problem we could leave the boat there. However that meant bashing into a head wind but the sea was a beam sea ( ie waves coming from the side of the boat) – which is a very uncomfortable motion which eventually did for Mags and she was seasick. It was a long rest of the night and even when the sun came up – we were both so dog tied it was difficult to keep our eyes open – but at least were out of the shipping lanes and could take it in turns to cat nap in the cockpit. Thankfully the closer we got to land the sea abated. Whilst striking the German curstey flag I lost my glove overboard. Thankfully it floated so we did a quick man over board drill and recovered it. By 0930 we were tied up in Ystad – very relieved and very tired.

But we couldn’t collapse – fault finding needed to start. Mags pursued the local route of finding a service engineer. While I spoke to Simon and Rustler – who eventually helped me diagnosis the problem – a faulty GPS unit. So the sailing holiday was back on! 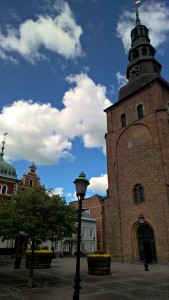 Ystad is a very beautiful old Swedish town and recently home to the Wallander series. It was much more attractive than the TV programme made out and there were no subtiltes. We tried to eat at the harbour restaurant but as Friday was a holiday in Sweden it was packed and no spaces until 2000 – with the night we had had we hoped to be asleep by then!