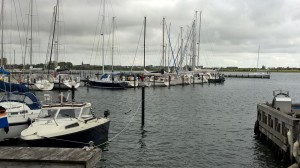 It was a very early start – which was especially challenging as I hadn’t gone to bed until the wee hours of the morning due to late night teleconference calls and a list of things I had to do before finishing work. It did mean however we arrived at Hamburg airport at 0830 and with the incredibly efficient Germany railway system we were soon on the boat just after midday – Mags had gone via the supermarket and had stocked up ( not that we had used up most of the food from the last shop). Carra will soon be able to do Ocado deliveries! We were pleased to see that Carra was snug as a bug having survived the tornado that ripped through North Germany sadly killing 3 people. We were going to refuel but given that it was blowing a hoolie and our box mooring technique was still to be polished, we decided to refuel with the jerry can, so 3 trips to the fuel pontoon and we were filled up. To our frustration the leak in the lazerette is still not fixed as there was about 500ml of water there. After several boat jobs we headed off to a local restaurant for a Wiener Schnitzel mit pommes.