Old Photos turn back the clock

In 1956 my father had done his national service at BKYC and recently I discovered a photo album he had made of that time. It was remarkable to see how the essence of the place remained in tack. 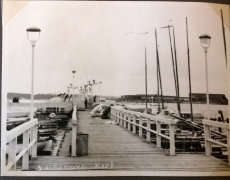 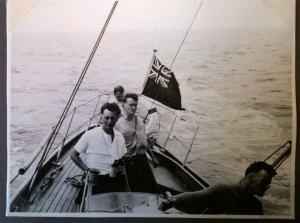 He died in 1990 – by then I had sailed several times in Kiel whilst I was stationed in Germany but it was only after he had died did I pass my Baltic Yachtmaster which allowed me to skipper the windfall yachts. Boats that he had sailed on many times – it was always a huge regret that I wasn’t able to share it with him. But somehow I felt he knew and I have always felt very close to him at Kiel knowing that he had spent so much time there – so it felt only right that we should bring Carra there. Next year BKYC closes so it was a sad farewell as we cast off our lines as it would be the last time I would visit. It was a beautiful day with a gentle breeze and we exited the box mooring perfectly. I know he would have be proud of us.

Determined to sail out – I tweeked the sails to eek out an additional 0.1 knot as we sailed past the familiar Freddie’s light and the Kiel U Boat memorial. But as Mags pointed out that 1.5 knots wasn’t going to get us to Fehmarn (some 40 miles away) any time soon. So on went the engine and we motored for the next 9 hours.

We needed to leave her in Fehmarn for 2 weeks and Mags had arranged that we could. Prior to arrival we phoned to check what berth we should go to and he appeared to be suffering from amnesia and said we couldn’t stay. Mags then “phoned a friend” – more importantly one who spoke German – and managed to jog his memory and a berth was allocated. So far so good…. until we arrived and realized it was only suitable for a boat half our size. Thankfully there is another marina in Fehmarn which had ample space. Parking in the box moorings was more of a challenge with just 2 people on board – you come between 2 posts and lasso the posts and attach the ropes to your stern. You feed them out as Mags rushes to the front of the boat and leaps off. Well that is the theory suffice to say more practice it needed to look like a local.

We secured the boat as there was a storm expected the next day, a quick clean up and we were off back to Helsinki… work does get in the way.